Last night (22 January 2020) our school debating team competed in the Rotary Club's Youth Speaks challenge, in the Plas Hyfred, Narberth. The standard was very high and our team was the youngest in the senior section. Despite this, the judges were very impressed by the quality and expertise of our debaters, awarding Daisy Smith the best Proposer of the evening and commending the whole team. Congratulations to Daisy, Seren Cowen and Gethin Lewis from year 10 who were all a huge credit to our school. 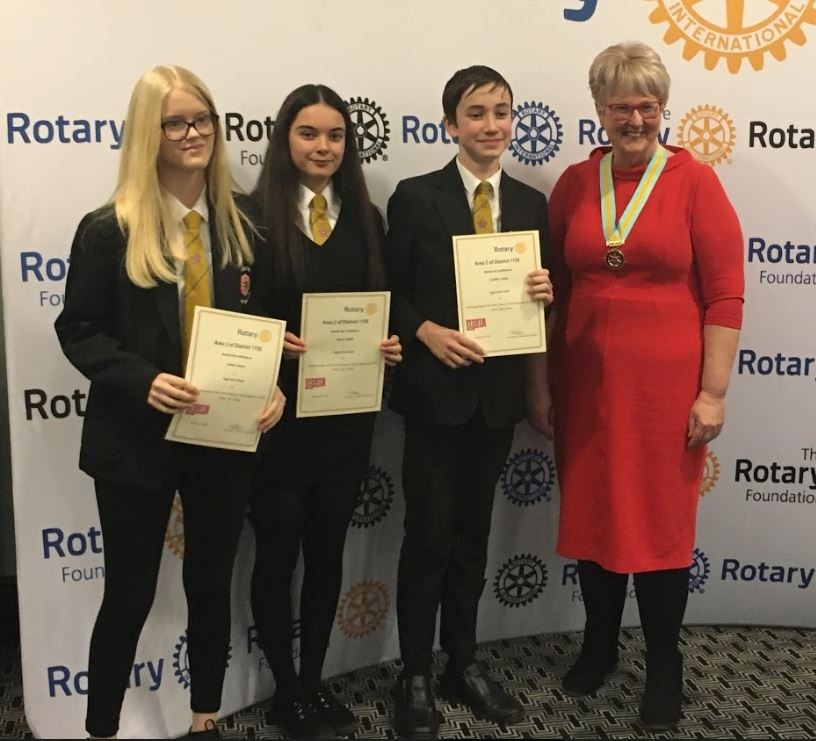 The Ysgol Harri Tudur Year 9 rugby team played the next round of the Welsh Cup yesterday (22 January 2020). They won 22-17 and are in the last 16 of the Cup competition.

Congratulaions to everyone involved and the team below. Good Luck for the next round!

Congratulations to Liam Topp who won the 2019 Sport Pembrokeshire Awards Boys (under 16) Sporting Achievement of the Year Award.

This is an amazing achievement, well done Liam. We look forward to hearing about your future successes.

Naomi had a tough election process up against candidates from Pembrokeshire College so huge congratulations to her. Very well done.

During the half-term, Naomi attended the Pembrokeshire Spotlight Awards at Folly Farm. Naomi was shortlisted for the award  'Achieving Positive Change' and was awarded First Place.

Naomi received a medal, certificate, and an Amazon gift card.

Naomi is an active member of the School Council and Pembrokeshire Youth Assembly. She is also a youth representative for the Dyfed Powys Police and Crime Commissioner Youth Forum.  It was her work through this in which she was nominated and awarded.

Mena has also this week been selected to compete for Wales at the Celtic Nations 2019 at the end of the month.

Congratulations Mena and good luck for the forthcoming Celtic Nations, we look forward to hearing about your future successes.

Poppy Bryant; Charlotte Lewis; Winnie Thomas; and Ruby Tingle; have this week been awarded their Baden Powell Challenge Awards. This is the highest award that a guide can earn and is the result of over 2 years of hard work completing ten clauses, ranging from Healthy Lifestyles and Global Adventures to planning and running activities for groups of peers or younger girls.

Sophie Moseley and Abi Thomas have been awarded their Guide Gold Awards. These are new awards that show ongoing commitment, developing leadership and team working skills and being willing to stretch themselves.

Well done to all! 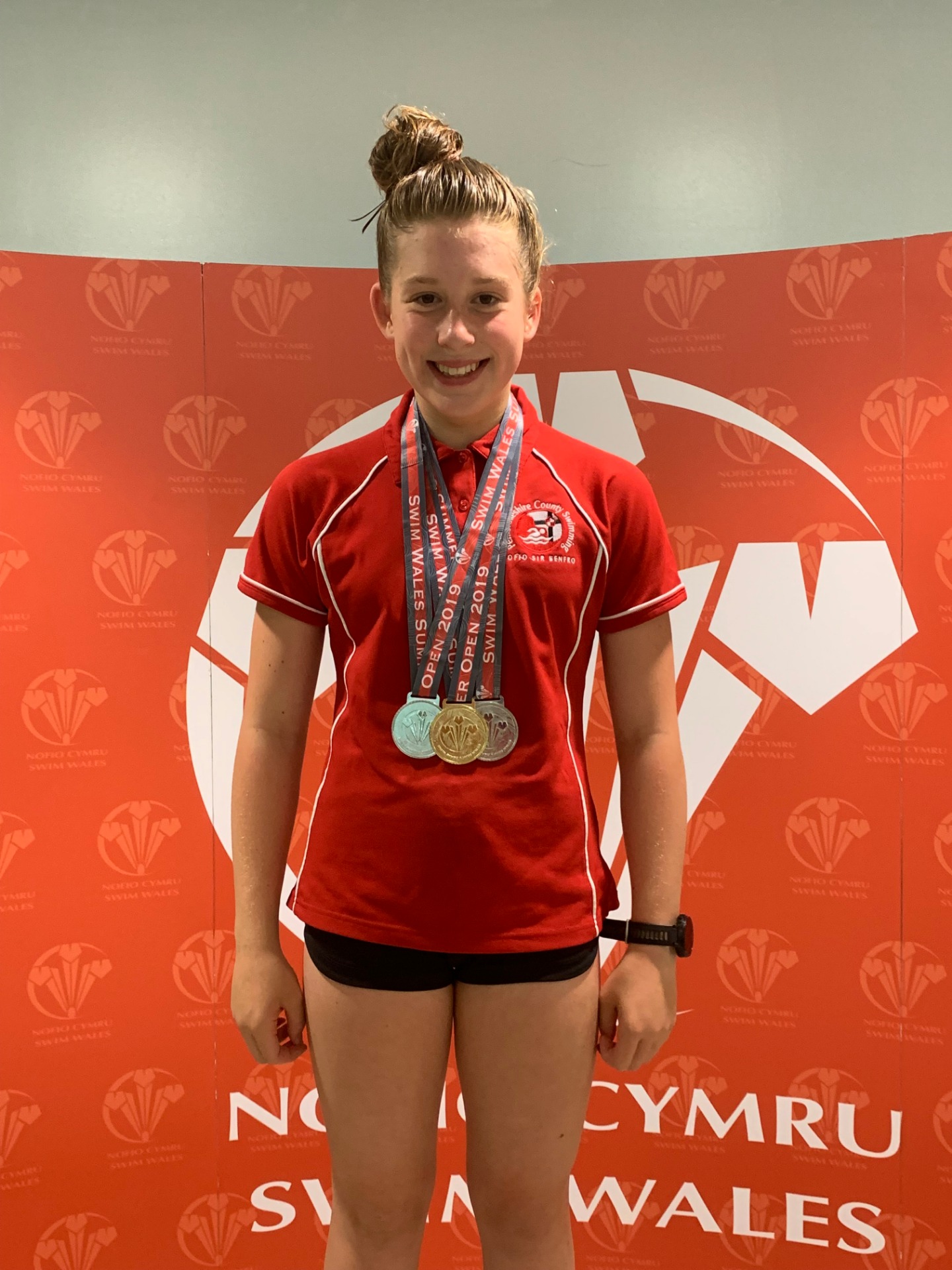 Caera Lewis (Year 9) took part in the Swim Wales Summer Nationals in July and August and won the Gold in 200m breaststroke and also picked up the silver medals in the 50m and 100m breaststroke events. This is an open event so it attracts swimmers not from just Wales but all over GB.
Caera has also recently been selected to swim in the Swim England National County Team Championships in Sheffield during the first weekend in October. This elite level meet sees the best swimmers from the English Counties and the Scottish and Welsh regions go head to head in the short course 25 metre pool.

Congratulations to the pupils below who were selected with their dance troupe, Vibe School of Dance, to perform at the Silverstone Grand Prix at the weekend. They went through a rigorous selection process followed by two days of gruelling training in Cardiff. They joined 2000 others from all over the country and the USA. Well done all! 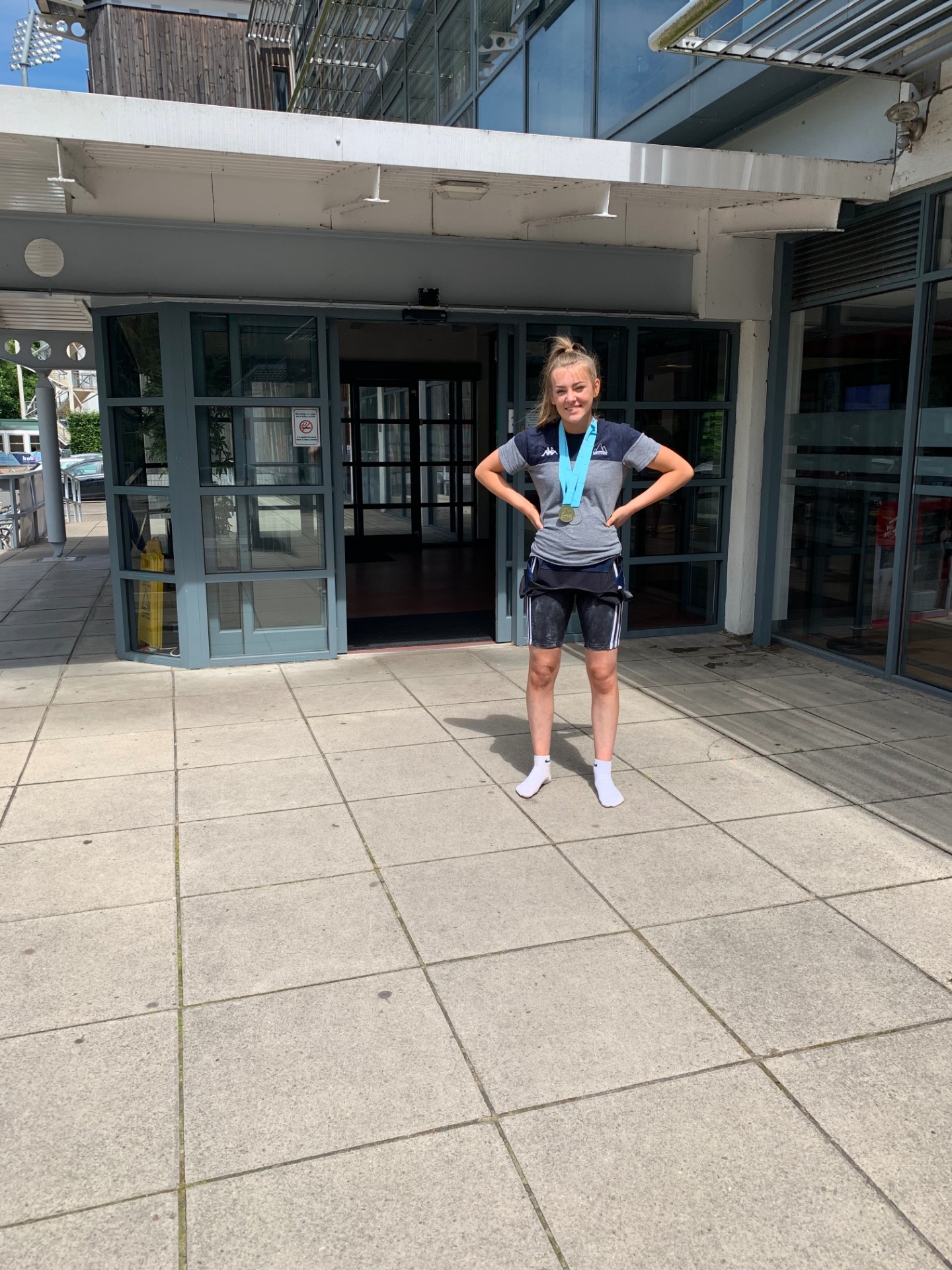 Congratulations to Mena Williams in Year 10. Mena competed in the Gemau Cymru at The Sport Wales National Centre on the morning of 5th July 2019, weightlifting.

Congratulations to Jordan Phillips in Year 9 who recently took part in the Tenby 10 km, completing it in a cracking time of 1 hour 6 minutes.

Congratulations to the following Year 7 pupils who took part in the Youth Writer Competition with the Pembroke Dock Rotary this year:

A special congratulation to Megan Cole who won the regional competition. 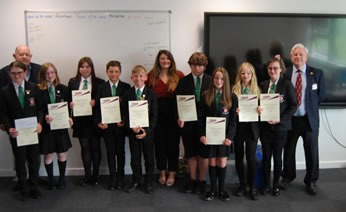 Milly Davies, Year 9, had Welsh gymnastics trials yesterday (30th June 2019) in Swansea.  She was successful and is now part of the Welsh squad. Congratulations, Milly!

A group of year 7 pupils recently took part in an "Education Engineering Scheme Wales" (EESW) Coding Workshop. The pupils had to complete a variety of coding and programming tasks using the BBC MicroBits to control a robot vehicle and then to complete in a robot battle to see which team was victorious.

The pupils found the workshop both engaging and challenging, with Caitlyn Chapman and Cara Williams coming out as workshop winners after a final robot battle saw them overcome the challenge of Alana Stratford-Miller and Naomi Shepherd who were worthy runners-up.

It is now hoped that further workshops will run next year to help introduce and develop pupils' coding and computational thinking skills within Ysgol Harri Tudur. 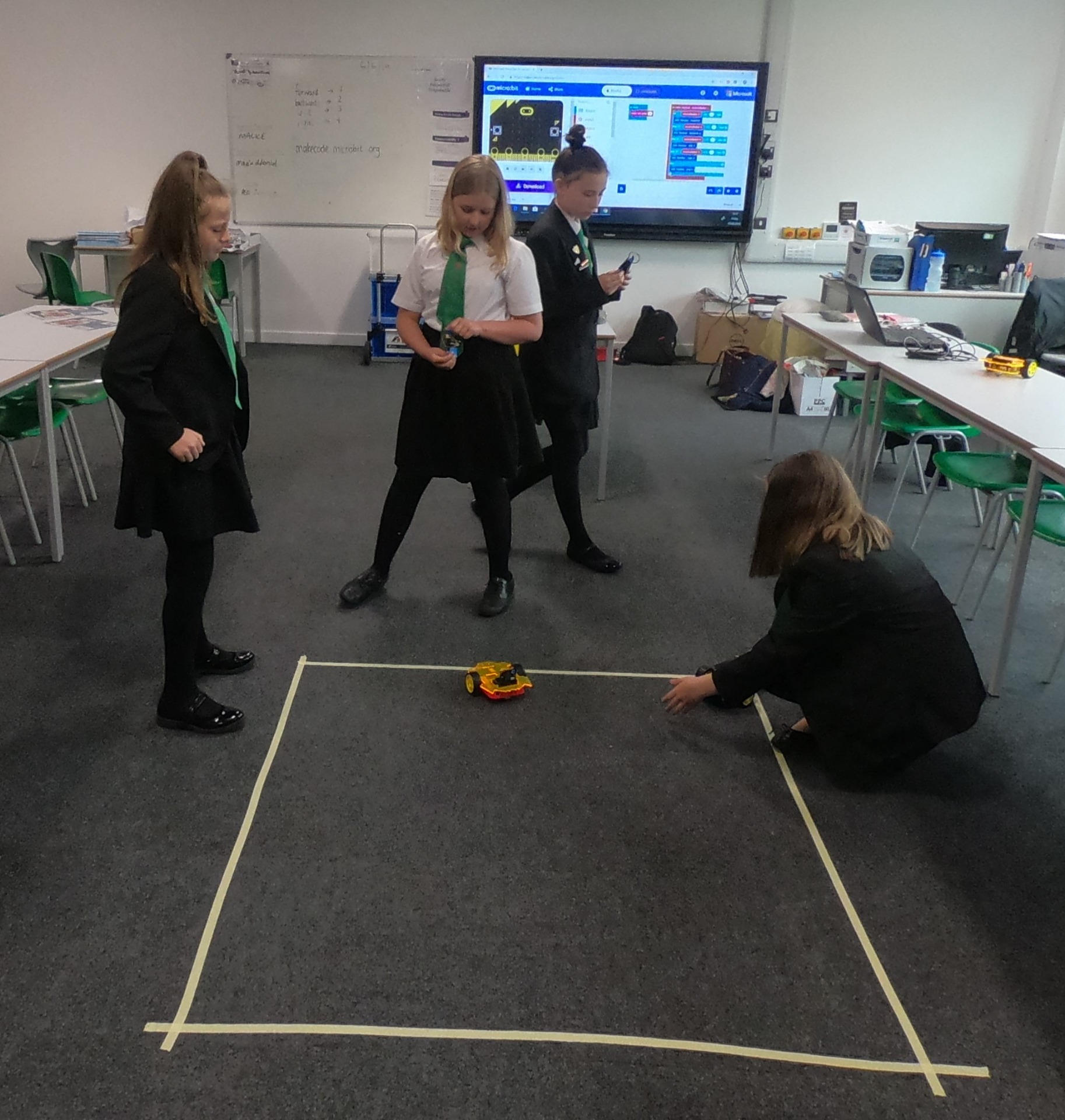 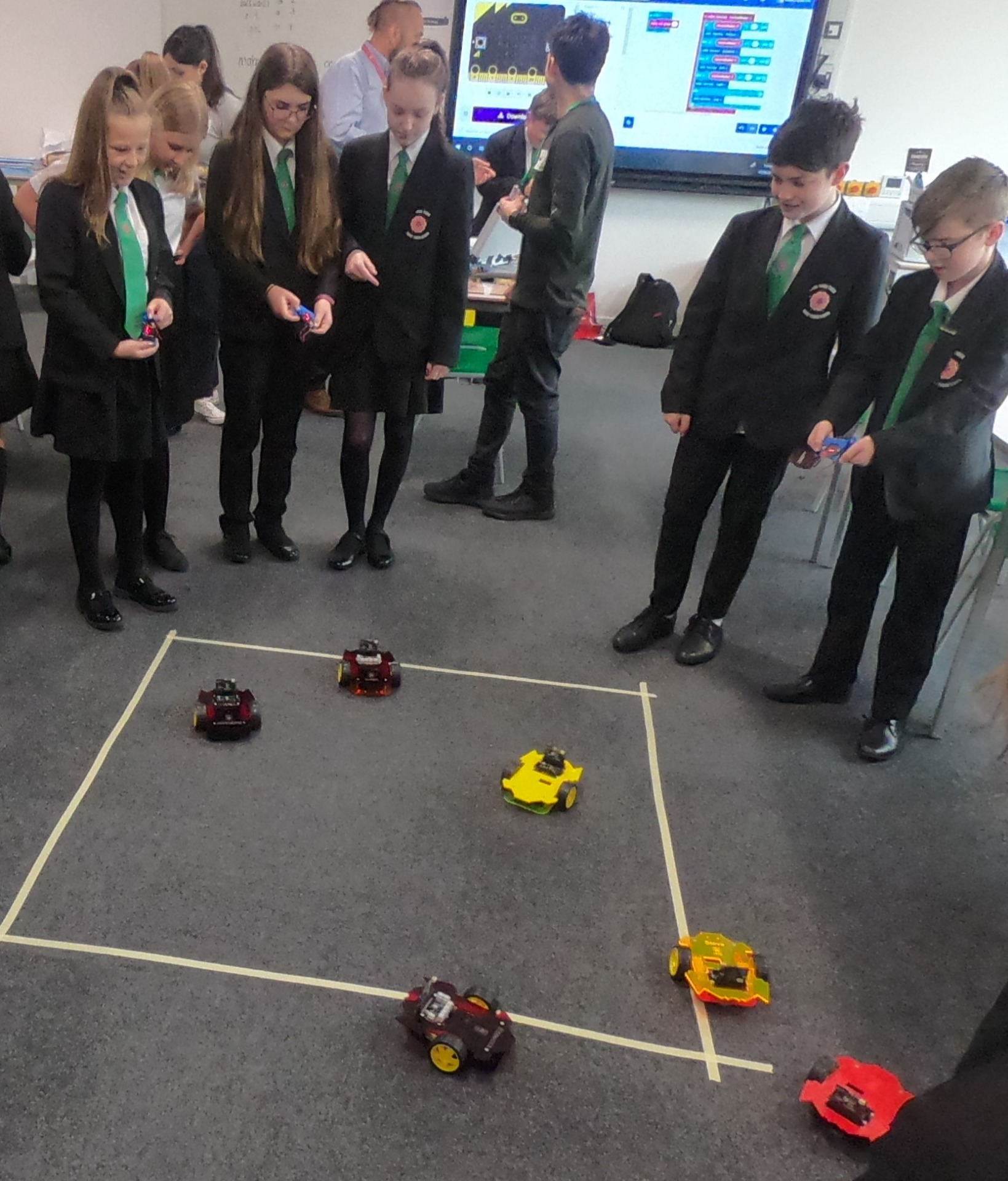 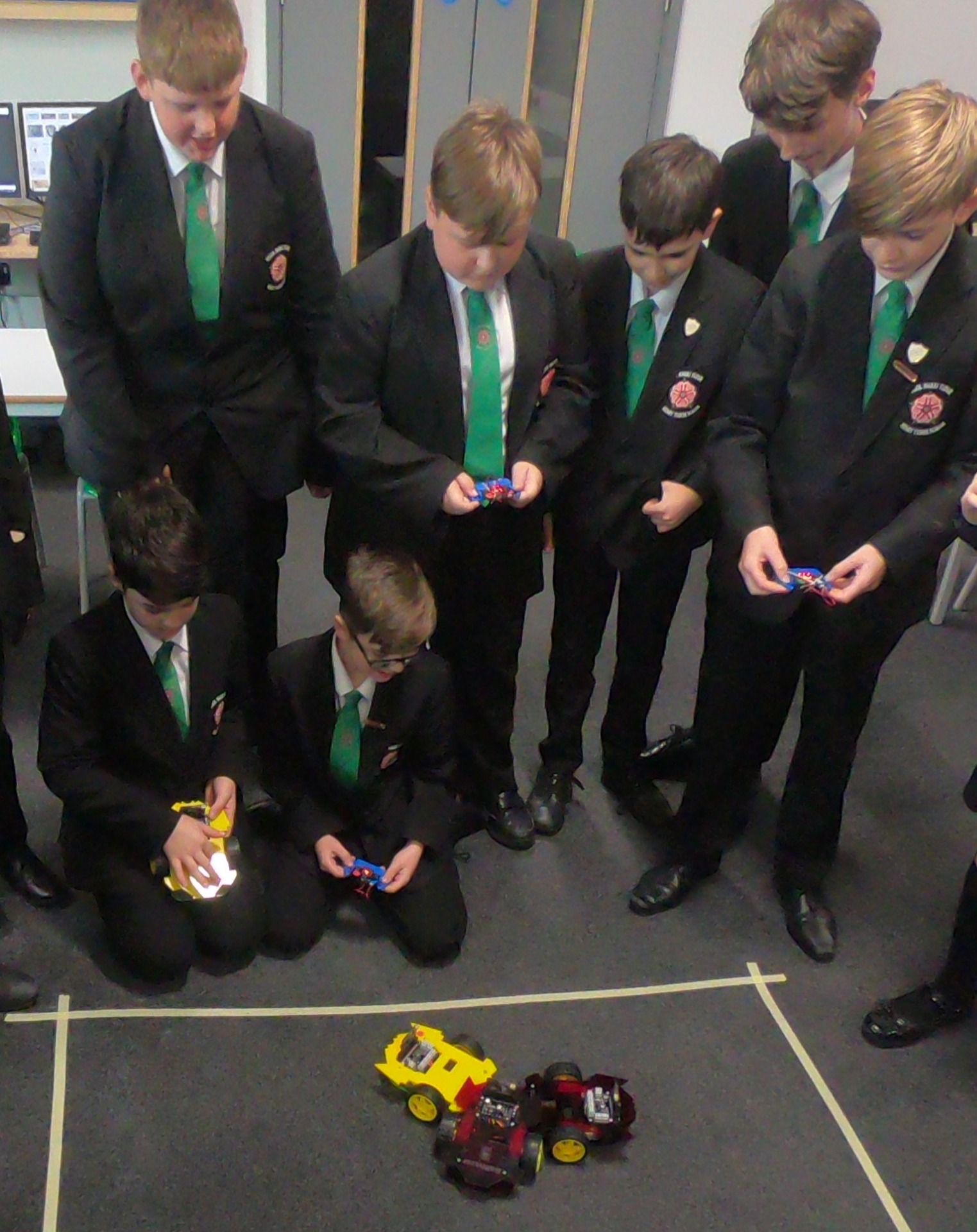 Keanu Williamsin Year 7 completed the CARTEN 100 miles on 2nd June 2019 in under 7 hours. Congratulations Keanu, this is an amazing achievement! 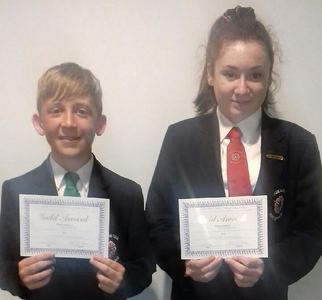 Rhys Daley and Ruby Tingle from Carew House are congratulated on being the first pupils from YHT to achieve their Gold House Points Awards by accumulating 2000 points. An excellent achievement by both pupils – very well done.

Congratulations to Lowri Hart, Year 11, who has achieved a number of outstanding results in Badminton:

Congratulations to Liam Topp from Carew House on his recent athletic success.

Liam entered the West Wales Athletics Championships in Swansea on 11 May 2019, coming first in both the 100m and 200m sprints.

Liam also ran in an Open Sprints meeting held in Cardiff on 15 May 2019 with a personal best of 11.33 seconds for 100m. He has broken the Pembrokeshire Harriers’ record 3 times this year, a record which was previously held for 18 years.

Congratulations to the following pupils who have been recognised by Haverfordwest County for their football successes and contributions; 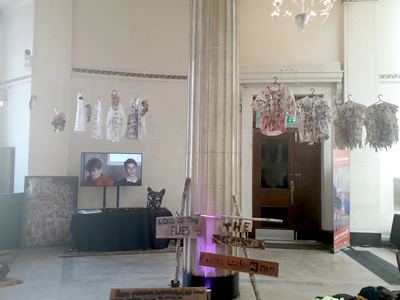 Between the 1st and 4th April 2019, Ysgol Harri Tudur's involvement in the Creative Schools Project was displayed at the Arts Council for Wales Creative Learning Festival in Cardiff. The exhibition included media and artefacts that our GCSE pupils have made over the last few years in preparation for their Lord of the Flies English Literature exam.

We are very pleased to still be working with these creative practitioners year in year out to provide immersive learning experiences for our pupils. 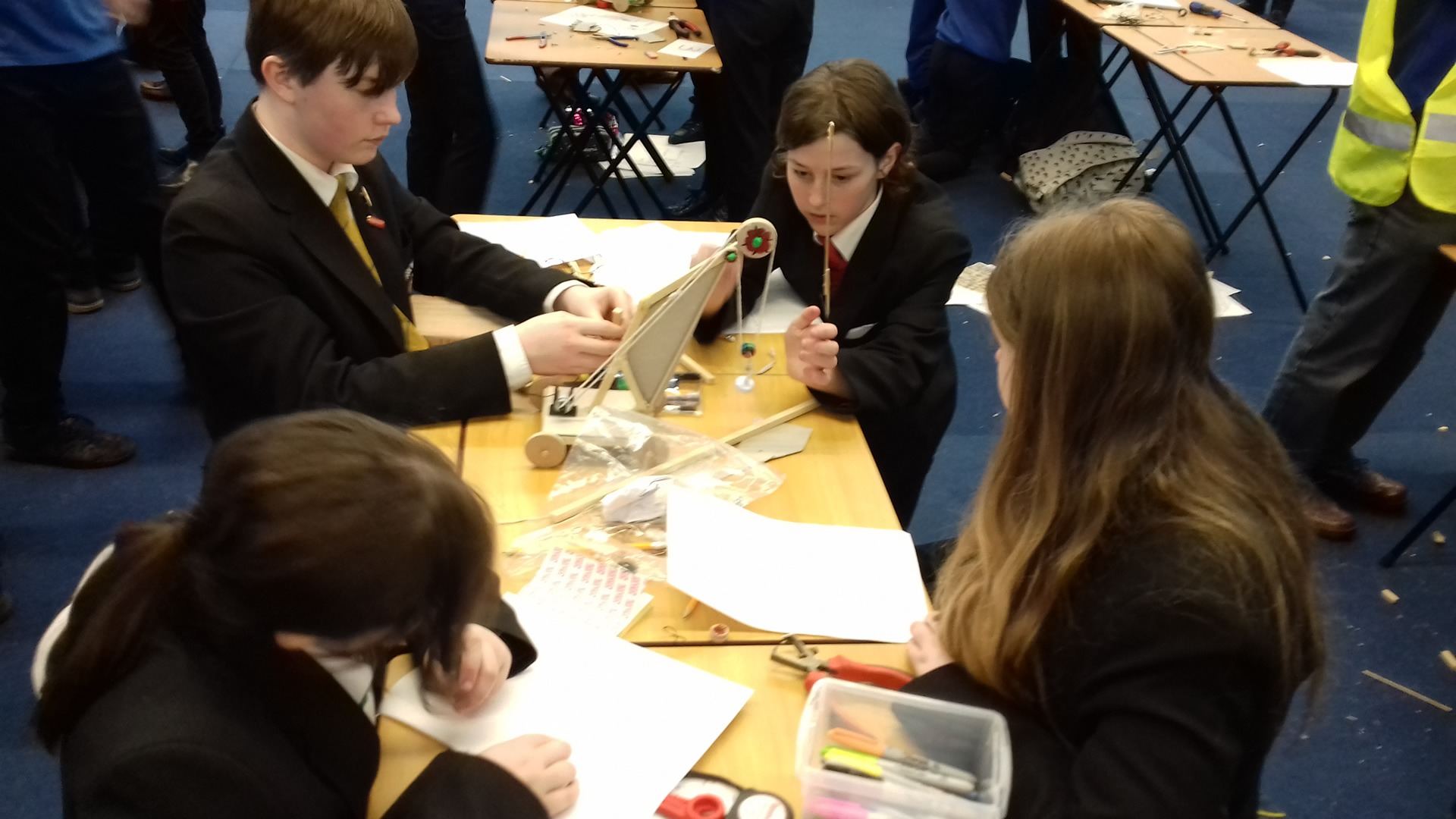 Ysgol Harri Tudur entered a Key Stage 3 team for the first ever Rotary Club STEM challenge event in Wales. The Director of Education and host of local dignitaries complimented the efforts made by all teams taking  part.

Debating  |  Seven pupils to represent West Wales at the Senedd 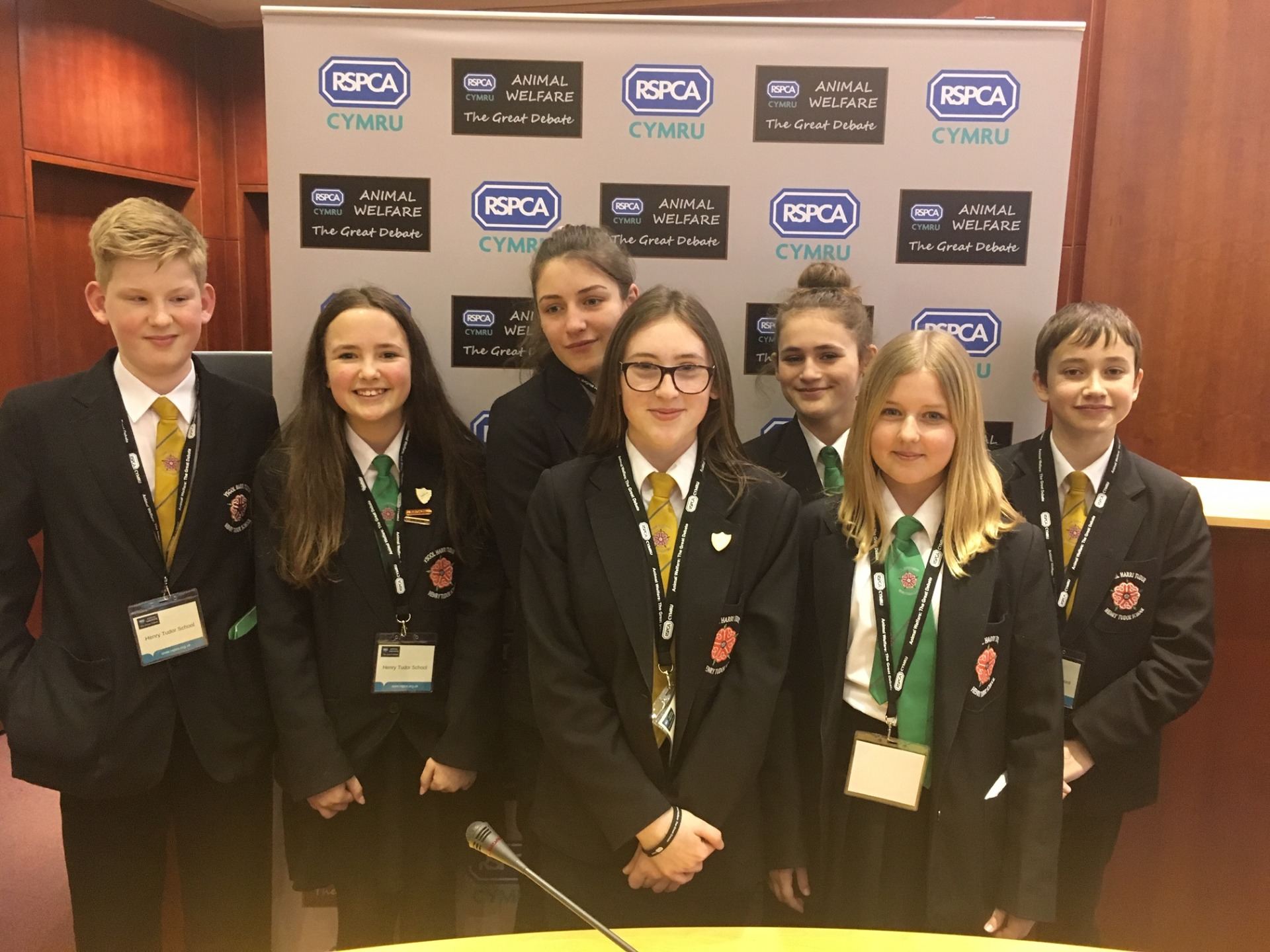 After presenting their arguments on whether there should be a National Health Service for Animals, our team of 7 pupils will now go on to represent West Wales in the Great Debate final at the Senedd on Friday 21st June. 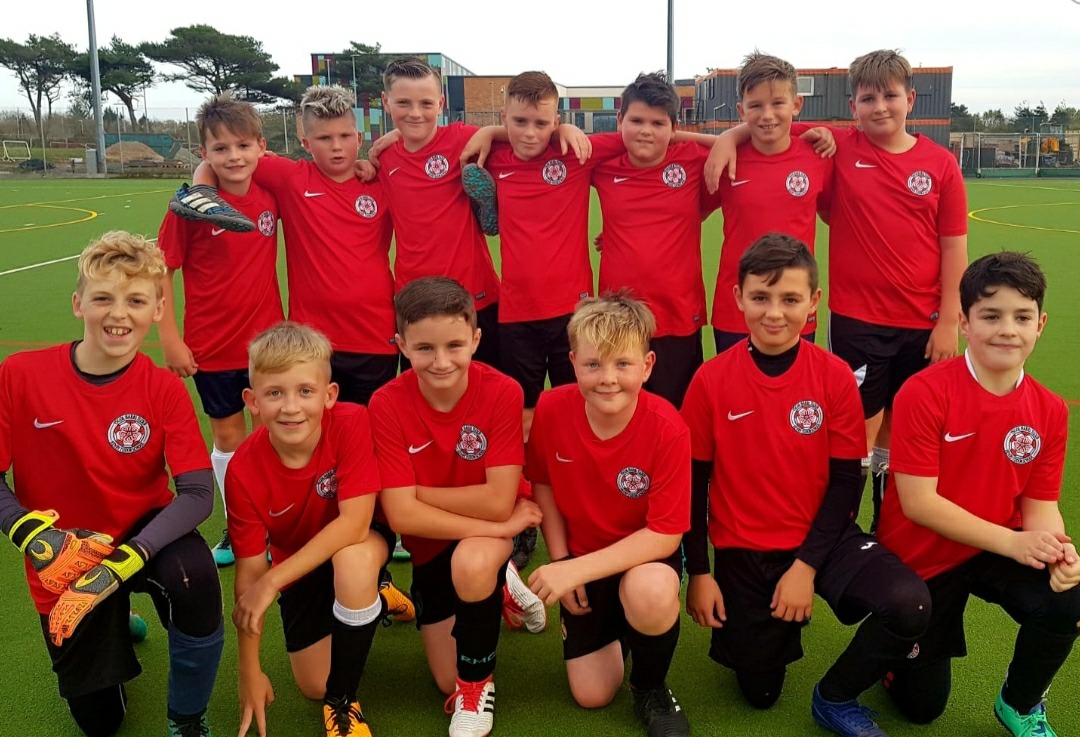 Congratulations to the Year 7 Football team who reached the last 16 in Wales in the recent Welsh Schools Cup.

Congratulations to Liam Topp from Year 9 who represented Ysgol Harri Tudur and Pembrokeshire Harriers at the National Athletics Centre (Cardiff) on 2 February 2019 in the Indoor 60 Metres Sprint where he was placed 3rd, gaining a PB. 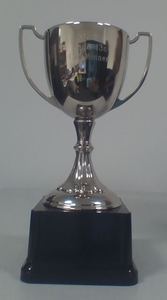 Congratulations to the Year 8 rugby team, who are now Pembrokeshire Cup winners after beating Greenhill School in a closely fought final.

Iori Humphreys has recently been selected to run for Wales in the International Cross Country race in Dublin, Ireland. Congratulations and good luck Iori, this is an amazing achievement.

Many congratulations to the following pupils for their superb performances, whilst representing our school and Pembrokeshire, in the all Wales Urdd Gobaith Cymru swimming finals, in the National Pool Cardiff.

All at Ysgol Harri Tudur are extremely proud of their great achievements. Da iawn chi! 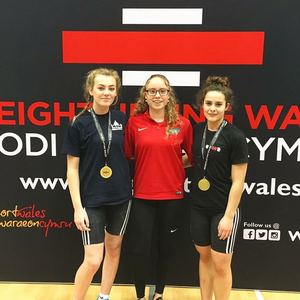 Mena Williams (Year 10) travelled to Bangor on 8 December 2018 to compete in the Welsh Age Groups Weightlifting Competition. She came away with a gold medal in the U15s for her weight category.

This is an amazing achievement. Congratulations, Mena.

Mena is competing in a British competition on Sunday 13 January 2019. We wish her good luck and we look forward to hearing more about her weightlifting successes. 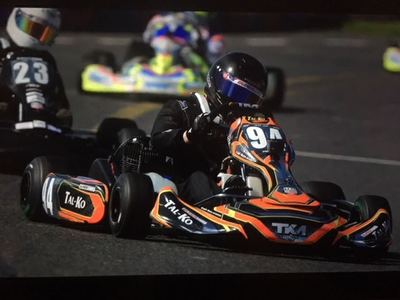 Congratulations to Ben Watson who competed in the British Karting Championships and achieved great success. He is now seeded 9th Junior TKM driver in the UK.

Ben will receive his award at the Autosport International Show at the NEC on Saturday 12th January 2019.

Ben has given amazing commitment to his racing this year and is determined to improve again in his 2019 campaign. What a brilliant sporting achievement. Well done, Ben!

Many congratulations to our fantastic Kids' Lit Quiz teams and their supporters who did themselves proud at the Wales heat at Howell's School in Cardiff on 21st November 2018.

Very creditable performances from both teams with fantastic scores, especially since we haven't had the usual team preparation this year we would normally have had. Nyah Elliott in the reserve team won herself a £5 book token in an audience hotspot question, and Grace Taylor won a team hotspot question. We are very proud of you all!

A massive thank you to Ms A Rees, Teacher of English, for giving up her time to take the teams to Cardiff! 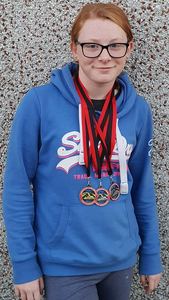 Congratulations to Holly Callen who swam the County Championship on the 27th and 28th October 2018. Holly swam six races and gained personal bests in all six.

Lowri Hart has qualified to compete in the Victor Welsh Senior International at the end of November 2018 with over 200 players from 28 countries competing. Lowri is the only Welsh Junior Player who has qualified. A brilliant achievement. Congratulations and good luck, Lowri!

The following pupils took part in the Valero Music Festival on Saturday 17 November 2018. Huge congratulations to:

for all of your amazing performances.

Many congratulations to Cory Baker in Year 11 who represented Team GB in the Scooter Championships in Corby on the weekend of 10-11 November 2018. What a brilliant sporting achievement.

Congratulations to all the pupils (listed below) who took part in the Official Opening Ceremony Show Choir performance of Karl Jenkins' Adiemus on Thursday 8th November 2018. You were absolutely superb. Mrs Kite says 10/10 !!!

The following pupils will be receiving the Headteacher's Award for their group performance at the Shakespeare for Schools Festival on Thursday November 8th 2018. Congratulations to them all, we are very proud of you!

We are delighted to note the nominations of pupils and a member of staff at the forthcoming Pembrokeshire Sports Awards taking place later in November:

Many congratulations to Sam Hodgson in Year 11 who represented Wales in the British Surf Kayak Championships in Thurso in October 2018. What a brilliant sporting achievement. Well done, Sam!

Many congratulations to Rhys Daley in Year 7 who has received a call up to the Cricket Wales Welsh Development Squad. Another brilliant sporting achievement. Well done, Rhys! 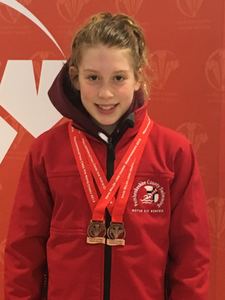 Many congratulations to Caera Lewis, who has been one of only four selected for the Swim Wales National Squad for the 2018-2019 season. This is an absolutely fantastic achievement. The Squad also includes many senior athletes who have participated in the Olympics and Commonwealth Games.

We are very proud of you, Caera, and look forward to hearing more about your swimming successes!